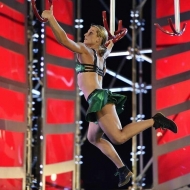 Jessie Graff is a Professional stunt woman living out her dream of being an actual superhero.

BE YOUR OWN HERO

Jessie Graff is quickly becoming known as a modern-day Wonder Woman, breaking stereotypes as she continues to break records. She attributes much of her success on the seemingly impossible obstacles of Ninja Warrior to her decade long career in stunts. Awarded the Action Icon Award for “Stuntwoman of the Year,” her credits include: Wonder Woman, Bright, G.I. Joe, Transformers, Die Hard, The Dark Knight as well as being a recurring double on Supergirl, Futureman, Agents of S.H.I.E.L.D, Leverage, and many more. Graff has a black belt in Tae Kwon Do and Kung Fu, with extensive training in countless other styles of martial arts, high falls, wipeouts, sky diving, motorcycles, stunt driving, fire, wirework and, flying trapeze. Graff also broke the pole-vault record at Georgia Tech (where she majored in Aerospace Engineering) and the University of Nebraska (where she earned her degree in Theatre) and was 1.5 inches away from qualifying for the 2004 Olympic trials in the sport.

The journey for Graff was ignited at the age of 3, when she attended the Big Apple Circus and begged the ringmaster to let her try. Although her attempt to join the circus was unsuccessful that day, the experience immediately sparked a passion to fly high and push herself beyond what others said was possible. Her parents enrolled her in circus gymnastics classes, which began her training and led her to other specialties in various acrobatic and fitness disciplines, helping her develop her range of strength, agility, and adaptability. Jessie currently lives in Los Angeles. She hopes that she can be a positive influence and show people all over the world that strong is beautiful.

Graff was a national sensation and breaking news phenomenon in 2016, when she became the first woman to complete stage 1 in the “American Ninja Warrior” Las Vegas national finals. She’s the 2nd woman to accomplish that same feat in season 34 of Sasuke, in Japan, and still holds the title of the only woman to complete stage 2 in both Ninja Warrior and Sasuke. Known for her superhero outfits and continued history of record breaking, she has ranked among the top 6 overall competitors in all of the past 3 regional competitions, making her the only woman to qualify among the men for national finals 3 years in a row. Graff made her first appearance on “ANW” in season five in 2013. She was quickly a fan favorite as she tackled the course in a chicken dress, in honor of her “Epic Chick Fight” video, and became the first woman to qualify for the city finals.
Season 10:
Qualifiers: 10th place, clear