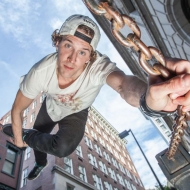 Jessie La Flair is one of the most influential Parkourists in the world!

Jessie La Flair is the worlds most recognizable professional freerunner with a creative style and unique approach to movement. La Flair boast 8 National & International podium finishes including two 1st places in both Speed and Style Competitions, the 2013 Best Trick Award and held the highest scored run ever at the Red Bull Art of Motion for multiple years.
With over 30,000,000 views and +320,000 subscribers, Jesse is the #1 most subscribed Pro freerunning and parkour athlete on youtube in the world. His international fans also follow his work as stuntman and character actor in commercials, T.V., and the biggest Hollywood hit films like X-Men Apocalypse as Nightcrawler (Stunt double), his guest star role in Hawaii Five-0, and appearances in TMNT, Divergent, 300 Rise of an Empire, as well as the lead Motion Capture artist for some of the biggest selling video games on the market like Uncharted 4 which he worked on for over 2 years. He has also continued to raise his public stature by destroying the Los Angeles American Ninja Warrior qualifier courses with the fastest times 2 years in a row. And if this wasn't enough La Flair's portfolio of businesses makes him a solid entrepreneur. He is an owner and a Pro Athlete of the worlds leading Freerunning brand Tempest Freerunning, the Co-creator and Co-CEO of the Pro Freerun League, Prime Shop LA, Freerunning Academy Online, Concrete Collective, and La Flair Apparel.