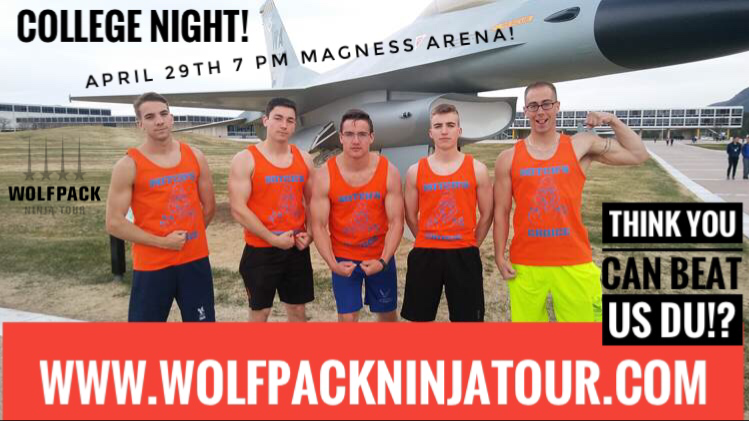 In the QUALIFICATION round, competitors will try to complete the Pro Course in the fastest time possible. The LEADERBOARD will track the top times for each category. A WOLF PASS COIN must be submitted for each run and is valid for only one run. As described above, a WOLF PASS COIN can be obtained by buying a WOLF PASS or a VIP ticket or by invite. Competitors may purchase up to two (4) additional WOLF PASS COINS for two (4) more chances at improving their position on the LEADERBOARD.

Athletes will qualify for FINALS if they are at the top of their division (top 16 for PRO men’s & women’s, top 8 otherwise) at the end of the QUALIFICATION round. A couple ninjas who just missed qualifying for FINALS may be asked to stay for FINALS as alternates in case there is an injury or a no-show. If alternates are needed, they will be chosen based on their ranking in the QUALIFICATION round. In the case of a tie that spans the boundary of who qualifies for finals (e.g., tie for 16th place), tied competitors will race head-to-head in a mini tournament bracket to determine who gets the last qualification spot(s). These tie-breaker races will be held right before the FINALS round and will be subject to the same rules as FINALS.

Unlike the QUALIFICATION round where ninjas race against the clock, in the FINALS round, ninjas will race head-to-head against each other on the Pro Course in a DOUBLE ELIMINATION tournament format. The winner of each head-to-head race will continue on to the next race in their bracket. Competitors that lose a race will have a chance to come back in the loser’s bracket.

Competitors that qualify for FINALS are responsible for showing up at the posted time. If you are a Finalist click HERE for instructions about showing up for FINALS. Competitors who are late will be disqualified and alternates will take their place.

The FINALS competition is a double-elimination format that allows ninjas to come back from a loss. Ninjas will be placed in the tournament bracket according to their finishing place in the QUALIFICATION round. This seeding gives an advantage to top placing finishers in the QUALIFICATION round. Finishing place will be determined based upon the ninja’s performance in both the winner’s bracket and the loser’s bracket. It is possible to work your way through the loser’s bracket and still win the event. Similarly, it is possible to lose in the first round and still come back to a top 4 finishing place. Note that winning in the first round does not guarantee a top 8 finish. The competition will be run through the Challonge web interface (www.challonge.com) and the placing for the tournament bracket will be determined by the website software. The method for determining places is a bit complex, but roughly reflects how many rounds into the tournament you make it (in either bracket) and gives a slight preference to people that go farther in the winner’s bracket. The top 4 places are always resolved via the tournament, but there are generally ties in the places higher than this.

Placing within groups of tied ninjas will be determined by comparing each ninjas fastest clocked course time during the FINALS round.

The faster ninjas will receive a better placing. In the event of a tie in final place in the bracket AND fastest clocked time during finals, the results from the qualification round will be used to determine placing. The use of times to break ties will not be reflected in the Challonge software but will be calculated by the tour staff. Prize money will be allocated to the top athletes according to their finishing place as determined by the rules described above. If you are interested in understanding the format better, visit www.challonge.com and run through some sample brackets.

The order of the races in the tournament is known at the start of the event and will be displayed on the full bracket. Note that this order may be different than the ordering shown in the sample bracket below. Additionally, the head judge may switch the order of an race for any reason (though all attempts will be made to follow the prescribed order).

Race 27 & 28 will be switched so that the Winner’s Bracket will have the rest advantage.

Disqualification happens in the following scenarios:

The top sixteen (16) Pros from the Leaderboard in the Men’s & Women’s divisions will compete on Finals Night at around 6pm as the last divisions to race. There will then be an awards ceremony.

The top eight (8) Ninjas from the Leaderboard in these divisions will compete on Finals Night starting at around 4:30pm. The YOUTH Women will be the first division to race.

This is a time based competition. Competitors will be racing up a rope one at a time to post times on a leaderboard. The 2 fastest Men’s and 2 Fastest Women’s times at the end of the event and before Finals will qualify to race during Finals Night on Sunday. During the Finals event, the 2 finalists will compete head to head for the prizes. It is the responsibility of the athlete to be present at time of award (at the Awards Ceremony immediately following the Finals Event.) The Prize is $150 for 1st Place Men’s & Women and $50 for 2nd place plus awesome SWAG.

This is a Total Repetition based competition. Competitors will be doing MAX pull-ups with results posted on a leaderboard. The most pull-ups at the end of the competition day and before the Pro competition starts wins. Pull-ups must be good form and all the way down and up. No kipping. A station judge will notify competitors of form and only count best-form pull-ups. A leaderboard will be updated online. Competitors are responsible for knowing what place they are in. It is the responsibility of the athlete to be present at time of award (at the Awards Ceremony immediately following the Finals Event.) The Prize is $400 for 1st Place and awesome SWAG for 2nd and 3rd place.

This is a time based competition. Competitors will be holding a handstand for times posted on a leaderboard. The longest held time at the end of the competition day and before the Pro competition starts wins. “Walking” is not allowed more than 2 hand “steps.” The winner will be decided by the timer and a leaderboard will be updated online. Competitors are responsible for knowing what place they are in. It is the responsibility of the athlete to be present at time of award (at the Awards Ceremony immediately following the Finals Event.) The Prize is $400 for 1st Place and awesome SWAG for 2nd and 3rd place.

This is a speed based competition. Competitors will be racing on the pro course and must have a WOLF PASS to enter times on a leaderboard. The fastest time at the end of the competition day and before the Pro competition starts wins. COMPETITORS OVER 40 MAY ENTER THIS COMPETITION AND A DIVISION AS WELL. The winner will be decided by the time the competitor achieves and a leaderboard will be updated online. As with the normal competition, a competitor may only try for the fastest time a maximum of 3 attempts (3 WOLF PASSES) Competitors are responsible for knowing what place they are in. It is the responsibility of the athlete to be present at time of award (at the Awards Ceremony immediately following the Finals Event.) The Prize is $400 for 1st Place and awesome SWAG for 2nd and 3rd place.

Competitors will accrue tour points based on their final ranking at each event. The final ranking is determined by the Qualification round for places 17 and higher and by the Finals round for the top 16. Tour points are structured such that those who qualify in the top 20 get an extra points boost with the top finalists geting the most boost (i.e., the point differential between places grows as you get closer to the top places). The top 99 competitors in each event will earn Wolfpack Ninja Tour points that will give them a spot on the overall Tour Leaderboard.

Each Tour is worth an equal amount of points and points can accumulate, being halved every year. If you end year 1 with 40 points, you would begin year 2 with 20 points and so on and so forth. The year ends on December 31st at midnight. The breakdown for points and bonuses are as follows:

Want to Volunteer for this amazing event??