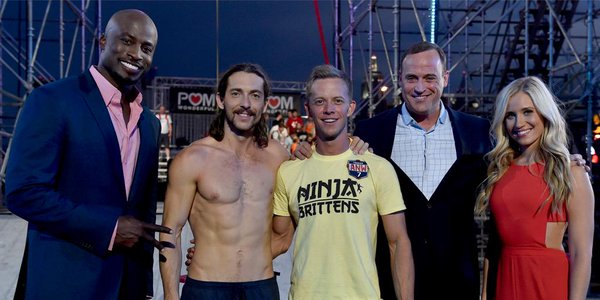 Geoff Britten is a family man, first and foremost. Sure he loves American Ninja Warrior, just like the rest of us (and so does his wife the very talented and lovely Jessica Britten; also a strong Ninja competitor on the show!) But Geoff devotes relatively little time to actual hardcore ANW training. He has a little gym in his basement where he trains very very hard for about 2 hours a day; every day. Part man, part machine, this 20 year + rock climber is one of only 2 people ever to complete the American Ninja Warrior course, and THE ONLY Ninja athlete to ever have a perfect season and not get wet!

When Geoff Britten got done with the rope climb–which he did in under the required 30 seconds–he was asked what he thought about Isaac’s odds of success were. He was gracious and paid respect to his climbing brother, and then also said “but I know one thing: I’m the FIRST AMERICAN NINJA WARRIOR!” This has been a point of contention among many fans and unfortunately, Geoff and Isaac grew distant after the competition. Although they both completed such an amazing accomplishment, only Isaac won $1,000,000 and the Title while Geoff literally walked away empty handed. Because of this–and perhaps America’s love of the underdog–Geoff has been seen more and more as the actual First American Ninja since he literally went first on the rope and succeeded first. Fans and pundits alike have decided Geoff’s acheivement deserves more attention and praise than he got and many agree now that he is the First ANW; a title that was as important or more important in Ninja lore than the actual money award. This fact seems to have irked Isaac and on Instagram there has been a heated dialog between fans on Isaac’s feed. Many quotes to Isaac are along the lines of “you may have won the money, but you are the 2nd ANW and Geoff Britten is the first!” This is unfortunate and is partially the reason why we feel Isaac is taking time off from ANW season 8. He did set out what he had wanted to do and he did win Total Victory. It must make Isaac very sad when so many people come to his Instagram and call him out for something he had no part of creating which is an overall confusion about the situation. Indeed, no matter the ultimate answer that time bestows on the situation, Geoff’s climb was indeed historic and unbelievable to witness. Since then, dedicated fans have raised more than $13,000 for the Britten family via a GOFUNDME which you can donate to if you feel Geoff also deserves a cash prize like Isaac got. You should click on the link and give a few dollars as well to this American Hero! Also, you may be surprised to see the First ANW poll results (vote and view below.)

Their athletic feat aside, Geoff and Isaac are climbers and were friends before the showdown. Both were friends of the Wolfpack, in fact, Isaac is one of the Wolfpack’s founding members. Isaac has since left the Wolfpack to go his own way and has decided not to participate in American Ninja Warrior season 8 nor Team Ninja Warrior. There are thoughts both ways on this: He should, he shouldn’t… In the end, it’s Isaac’s call to make and his life to live.

That night was a crazy and emotional night and we all cried cathartic tears; Ninjas had won. Some were tears of joy, some were sadness. As ninjas, we have trained so hard for so long and we all wanted to see it go down, many of us wanted to be the first and when our own dreams came up short, we all transferred that dream-hope to our fellow ninjas. It was hard to watch Geoff win and become the “First American Ninja Warrior” only to be replaced minutes later by a faster ninja who had more juice in the tank. Geoff and his family were going bananas when he accomplished his dream: which as he says in the interview was to beat the course. Geoff wanted to beat the obstacle whereas Isaac wanted to beat Geoff and was able to have a new benchmark to beat or one-up. Isaac did what any one of us would do in that situation: he tried his absolute hardest to attain Total Victory.  The much less competitive Geoff Britten, like his brother Isaac Caldiero, is an American hero. He is humble and gracious and he is a close friend to the Wolfpack. Take our POLL and see results on the community and fan’s thoughts about who the actual First American ninja Warrior is.
[yop_poll id=”1″]

In fact, in a way, he is a Wolf: He is a long time rock climber and a close friend and strives to improve his body and mind daily. He is a positive role model and doesn’t dwell on the fact that he came “this close!” He will definitely go down in the history books and he is an inspiration and role model to kids, Ninja fans AND Ninjas everywhere. He is truly a man of integrity. A man you feel you can trust with your family, your money or your life. He is a man that values hard work and discipline and he is psyched to give it another go.

Here’s to you, Geoff Britten; The Wolfpack Ninjas salute you!

Here is his memorable TRY HARD finish of Stage 3 at Finals to earn him a shot at the rope!

It is worth going to the comments and reading through them on these YouTube videos to get a sense for the fan “confusion” about who is the “First.” Please vote in our poll to the right on who YOU think is the actual FIRST AMERICAN NINJA WARRIOR!

GOFUNDME! – Geoff’s fans have made a fund to raise the $1,000,000 prize money that they feel he deserves for completing the course! Do you want to contribute? What do you think about the controversy? Who is the First American Ninja Warrior? PLEASE LEAVE COMMENTS BELOW!!! WE WANT TO KNOW YOUR THOUGHTS!