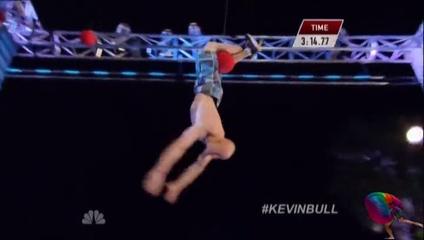 Kevin Bull is one of the best American Ninja Warriors – You knew that.

ut what you didn’t probably know was that Kevin Bull is a very wise and humble athlete who has learned the lessons of life and leads by example. In this interview, Kevin lays down the attributes that he feels have led him to amazing moments as one of the best American Ninja Warriors.

Kevin reminds us that if you continue along a path towards self-improvement in any area of life, Time itself cannot be underestimated as the important ingredient of becoming that which you set out to become. Day by day dedication to excellence adds up into true excellence. It just takes time.

Kevin also discusses thinking outside the box for his famous move (pictured above and seen in the video below.) He also discusses how it almost went wrong and what it was like actually trying such a crazy maneuver! Kevin Bull is a close friend to the Wolfpack Ninjas and has come out to train with us on several occasions. At one point, a few years ago, Kevin trained with us at the Wolf Den in Fort Collins and was very open to learning new training methods and techniques. He incorporated these quickly and is now a Team USA competitor and one of only a handful of Ninjas to ever make it to the legendary upper-body torture course which is stage 3 at Midoriyama. You have to watch the video below of Kevin’s ICONIC MOVE. This is the move that everyone still talks about to this day as being one of THE highlights in all of American Ninja Warrior history:

Here is the ICONIC MOVE from one of the best runs in ANW history:

Kevin Bull has another interesting story to tell and that is about his experience with Alopecia. Kevin is quick to point out that this was actually an experience that really helped mold him and was not as negative as one might think. Kevin used the experience–that might cause feelings of insecurity in most people–to grow and learn from and to become more social where he might have been afraid prior to acquiring the condition. We have a summary about Alopecia from Web MD below, and you should definitely not miss Kevin’s discussion about it on the podcast.

What is alopecia areata?

Alopecia areata is a type of hair loss that occurs when your immune system mistakenly attacks hair follicles, which is where hair growth begins. The damage to the follicle is usually not permanent. Experts do not know why the immune system attacks the follicles. Alopecia areata is most common in people younger than 20, but children and adults of any age may be affected. Women and men are affected equally.

What happens in alopecia areata?

Alopecia areata usually begins when clumps of hair fall out, resulting in totally smooth, round hairless patches on the scalp. In some cases the hair may become thinner without noticeable patches of baldness, or it may grow and break off, leaving short stubs (called “exclamation point” hair). In rare cases, complete loss of scalp hair and body hair occurs. The hair loss often comes and goes-hair will grow back over several months in one area but will fall out in another area.

When alopecia areata results in patches of hair loss, the hair usually grows back in a few months.1 Although the new hair is usually the same color and texture as the rest of the hair, it sometimes is fine and white.

About 10% of people with this condition may never regrow hair.2 You are more likely to have permanent hair loss if you:

Because hair is an important part of appearance, hair loss can result in feeling unattractive.

In some people with alopecia areata, the fingernails and toenails become pitted-they look as if a pin had made many tiny dents in them. They may also look like sandpaper.

Alopecia areata cannot be “cured” but it can be treated. Most people who have one episode will have more episodes of hair loss.